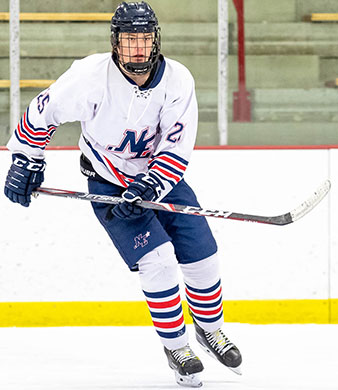 The New England Stars of the NA3HL are pleased to announce that forward Corey Tumenas has signed a North American Hockey League (NAHL) tender agreement with the New Jersey Titans of the NAHL’s East Division.
Tumenas, 20, just completed his second season playing for the Stars in the NA3HL. The 6’0/175 lbs. native of Leominister, Massachusetts, averaged a point per game during the 2019-20 season, recording 46 points (18 goals, 28 assists) in 46 games played.
Tumenas made his junior hockey and NA3HL debut during the 2018-19 season with the Stars. Overall in 92 career NA3HL games, he has recorded 60 points. He also posted one point in two playoff games during the 2019 Fraser Cup Playoffs.
He is the first member of the Stars who has signed an NAHL tender agreement this season.
Click here for a list of 2019-20 NA3HL tenders
A tender is a contract, of sorts, a player signs announcing his intentions to play for that particular NAHL team and that NAHL team only. Once a player signs a tender with an NAHL team, his playing rights belong to that team within the NAHL and he may not be recruited by any other NAHL team. Each team is granted ten (10) tenders, which include one tender exclusively used on players from the NA3HL – plus or minus any trades – which became active on Nov. 1. Tendered players are not eligible for the NAHL draft, which will be held on June 2, 2020.